” If time freezes, let our joy and smiles remain. ❤ ” – Hummingbird_Song

Below is the last Instagram Post from Rachelle which Timothy, her brother captured around 08:00 on April 11, 2018 morning, the post was posted around 03:00 on the same day. She left us on April 12, 2018 early morning, this post was found archived by then.

People who know and have met Rachelle would describe her as a gentle, loving and caring person. She would greet you with her genuine smile and had encouraged many, including myself. You may ask why this tragedy can happen to such a lovely young lady. I asked myself many times and still continue to ask why. But then I came to a realization; we are all human.

Although I do not agree with the decision she made, but as a family, we respect her choice. After her passing, we have an overwhelming peace and see that God had reached out His hands and carried Rachelle back home in Heaven. She is now with her Heavenly Father and grandparents, she is not alone.

Rachelle’s decision to take her life was not the result of a long term mental health issue or depression. I have been walking with her since late 2016. I am grateful that Rachelle was willing to share the challenges she had gone through with her family. Her brother also shares my experience.

Rachelle had wisdom and the willingness to learn. She was also willing to let go some of her initial expectations on dating and was very realistic. Rachelle suffered greatly in recent months as a result of a relationship that she felt became abusive. Around early this year, she finally broke up and ended the damaging relationship. She was genuinely happy and told her relatives and close friends that she was ready to recover and move on with God’s love, so to prepare herself for her next relationship.

Throughout this relationship, she had held on to the teaching of the Lord. She upheld her core values and did not give up. Even though she had to let go of this relationship, she still prayed for the wellbeing of the other person, not for herself, but genuinely for salvation. When they were together, she tried many ways to help both of them to grow, through counselling, mentors, couple sharing, joining classes, cleansing and even talking to seniors with more life experiences. Rachelle is a reflective person and willing to take advice, as reflected in her diary. We are glad that she loves to write, as her writing gives us solace through such difficult times.

It was the relentless, disrespectful, degrading and abusive behavior after the breakup early this year, which bombarded her and drained the nutrients of this healthy tree. Drained the sap until it broke her lively spirit and confidence. This is a horrendous behavior. It breaks our heart to witness this, but it was what happened. Although Rachelle was a strong young woman, these types of unending communication after the breakup, such as endless phone calls (office/private), messages, emails, not only affected Rachelle’s performance at work, but also demolished her self-worth entirely. Even though her job performance was being affected, she still continue to put effort in her workplace.

Rachelle tried to stop this abusive behavior happening to her and demanded it to stop on several occasions. In addition, my husband had requested a few times to meet up to stop this but was rejected because conditions were set before having any meetings. At one point, we thought of reporting this harassment to the police, but did not do so, because we were afraid that something could happen.

Rachelle had wisdom to discern what virtues to uphold. What to do or what not to do. I have witness her growth in maturity both as a young adult and being a Christian, especially over the last year.

Although Rachelle was going through heart-brokenness and pain from this, she continued to fight and never compromised on her Christian core values which had anchored in her heart. We are proud of her.

As a family, it is heartbreaking to see how this has unfolded. But this illustrates the fragility of human beings. As described in Roman 7:15-16, “I do not understand what I do. For what I want to do I do not do, but what I hate I do. And if I do what I do not want to do, I agree that the law is good”, although forgiveness is not an easy step and may not be what we want to do, it is what Rachelle would have wanted, echoing what the passage said.

I write this in order to give Rachelle a voice and to bring out the impact of emotional abuse and harassment. Due to many reasons, people may intentionally or unintentionally put one’s anger, bitterness on others using many hurtful words or behavior to someone we said we love. We don’t want to see this happen again. Because it is devastating to everybody.

No family, has to go through the pain of losing their love ones like this.

After going through all the brokenness and mourning, we chose to FORGIVE and EMBRACE with GOD’S LOVE and MERCY. Loving someone who have deeply hurt you and been abusive towards you and your loved ones is a difficult decision, but what else can we do but carry forward Rachelle’s legacy! Hatred and retribution is not what Rachelle would have wanted, it is the unconditional love from God that empower her to forgive and not to bear bitterness towards her source of pain, and this we will uphold.

What more could I ask of a daughter? I am proud and thankful to be her mother. As parents on earth, even though how much we love her, we are still very limited in our understanding. Our children are not our possessions. During her time with us, we are only Rachelle’s steward. As long as we do our part wholeheartedly, we have done our part. Even though we love her and walked with her at different stages of life, especially last year, I can only feel or try to understand the hurt in her heart.

It is only God, her Creator, who can feel her pain 100% and loves her the most.

May we all remember Rachelle’s gracious smiles that she always greets us with, her compassion for young people, the passion towards music (self-taught keyboard, worship) and the passion to fulfil her dreams in a realistic way! She had the chance to write a song called, “You, Will Never Give Up On Me”, which she wrote the music, lyrics and sang in 2011, Timothy wrote the story behind this song. Recently she also had a chance to be a backup vocalist. Looking back, she had her first live broadcast at the Campus Radio Station of York University in 2013. She had used God’s given talent for His Glory. Her 29 years with us has brought us sweet memories and precious moments.

It’s hard to accept the fact that she has left us. However, we truly believe that she is in Heaven with our Heavenly Father. Before she left us, she gave me a key chain, which is my last gift from her, it speaks volumes. 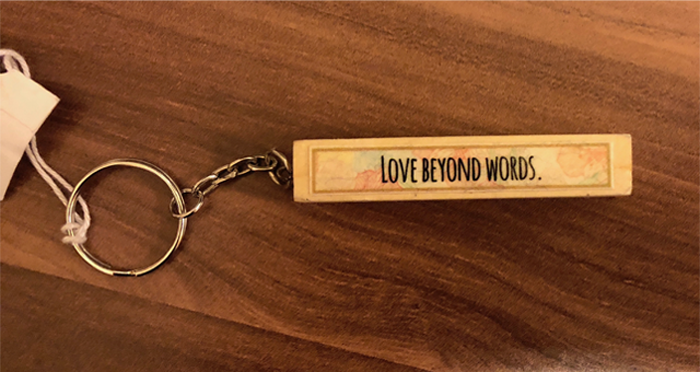 I would like to show our gratitude for all your prayers (we appreciate your continual support on this for our family), care and reached out to us from different communities of friends and relatives during this difficult time.

– Flora (on behalf of the Chau Family, with input from Danny and Timothy)

Special Notes: This sharing is solely from my own feeling.